Check out the list of the top 10 forgotten muscle cars that definitely deserve a comeback! 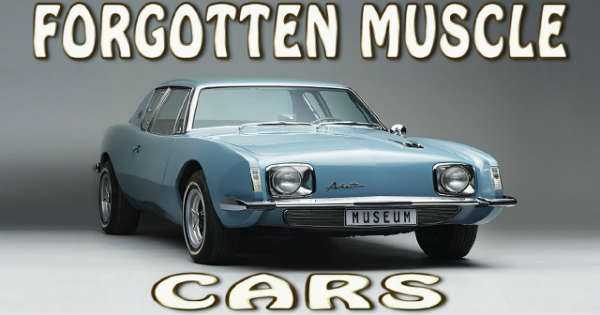 We all love the classic American cars, but now we can take a look at some of the forgotten muscle cars, simply because should not be left in history. The American muscle car trend has been around for more than half a century though many will argue where its beginnings were. Some will say that it started with the 1964 Ford Mustang; some say it was the Plymouth Barracuda. Furthermore, there are some who say that it was the 1950 Dodge De500.

Debating about its ultimate root is impossible hence everyone has its own opinion. Yet we can most certainly say that it was exactly in the early 60s when a new wave of cars emerged from Detroit and that trend has survived all up to now.

That is why we take a look at the following video and check out these undeservedly forgotten muscle cars from the above mentioned period.

Number 1: First on the list is the 1964 Studebaker Avanti R3. Their production ended in 1964 and no one see them as a serious piece of muscle car. They had most of the features the Mustang had even two years before it was produced for the first time. Its max speed was 171 MPH and it was claimed that this was the fastest production car ever made. Recently, such Avanti R3 was sold for $96,250, an absolute bargain.

Number 3: Following the Pontiac is the 1964 Mercury Comet Cyclone. For the 60s market and its muscle car, this car was as basic as it can get. It was based on the Ford Falcon. 50 Comets were built specially for the drag race which also had fiber glass hood, fenders, doors, as well as Plexiglas windows. It came with 425 HP.

Number 4: Furthermore we take a look at the 1968 Ford Ranchero 500. It has been a long time shadow of the El Camino. The pickup ended up having 335 HP jet cobra engines. The lack of weight over the rear wheels made them a handful to drive and that is the reason why only few were built with its biggest engine.

Number 5: The 1969 Chevy Kingswood 427 is our next choice. Back in the 60s, you could order virtually any option or addition you would like for your car which companies would build it just for you. So you could get this station wagon with rally wheels, hideaway head lights and the same 390 HP V8. So this 427 Kingswood market the following decade on the drag tracks. This absolute stunning beast is definitely something we should not forget about.

At last, check out the top 10 classic American muscle cars.