Did you ever have the chance to take a ride on the Atlanterhavsveien? 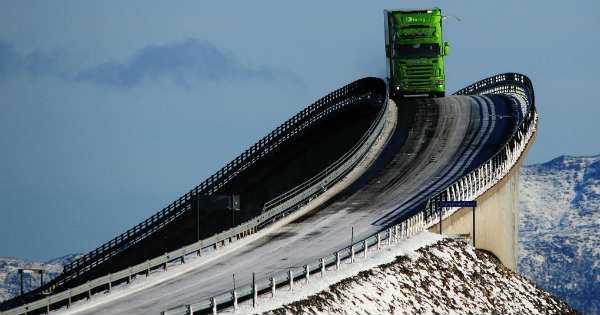 We were proven many times how nature and architecture rich the Scandinavian countries can be! Not long ago, we saw the crazy bridge connecting Malmo and Copenhagen. Now, we are about to see Atlanterhavsveien, the scariest bridge of all! Driving here is like taking a ride in a horror based video game! However, it attracts a lot of tourists who won`t miss a chance to take a ride on the Atlanterhavsveien bridge!

Everything that you are about to see in the video that we have prepared for you, and read in this intro, is consisted in the title of this article – is it The best drifting–rollercoaster that you have ever seen or really the most dangerous route ever engineered? Whatever your answer to that question will be, I`m very much sure that you are going to really enjoy the following four minutes, with a footage taken at one of the most north-located highways in the world,

The Atlanterhavsveien in Norway, is also known as the Atlantic Ocean Road. The route that looks like it is located on another, deserted planet, is one of the strangest looking and totally freaky places that I have ever seen. It is 5.2 miles long and the video that you are about to see is shot from the driver`s perspective, so it really gives you the real feeling on how would it look like to do some drift-driving here, at this dangerous but at the same time, a road that will completely allure every daredevil to try and pull some stunt on it.

It looks like a real muscle car rollercoaster, maybe partly because it was originally meant to be a railroad. However the case might be, watch the video and see and feel what I`m talking about.

At last, if you want to see some other scary bridges, follow this link!