If you have visited you news feed today, your have probably heard of the Oresund Bridge! The marvelous bridge that starts as a tunnel and then turns into a bridge and connects two important Scandinavian cities! 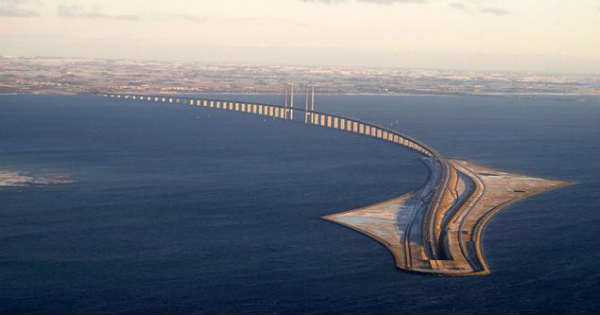 Let us introduce you Oresund bridge – the scary looking bridge that ends up as a tunnel in the middle of the sea! The main idea is to connect the metropolitan cities of Copenhagen and Malmö. This architectural marvel was designed by the Danish company COWI! It offers you a 5-mile adventurous ride through different terrains whereas the most extreme is the one under the sea.

As we mentioned, the Oresund bridge ends on an island made of material excavated from the seabed, while the tunnel is made out of concrete. It is interesting that beside everything, the island became a true haven for biologists! Namely, they have managed to find over 500 different kinds of plants and rare green frogs on it.

Anyway, from the 1st of July 2000 the Oresund bridge started connecting the cities of Copenhagen and Malmö. Since then, according to the statistics, two-thirds of the passengers passed Oresund by train – an excellent solution for those who are a little bit afraid to cross this fascinating bridge.

Anyway, if you decide to cross the Oresund bridge by car, have in mind that you have one pay toll where you must pay around 20 euro. Each day, a large number of vehicles can be seen here and supercars are normally not excluded. That`s why you must not forget to click on the 2nd page, where we have prepared for you one epic supercars video!

Now, if you want to see some scary and dangerous roads, follow this link! Feel free to tell us which roads on the link is the scariest for you. Any interesting story to share about that topic?