As we all know, vehicles come in different shapes and sizes, colors and materials. But did you know that all it takes to build a F1 race car is wood, to be precise, matchsticks! 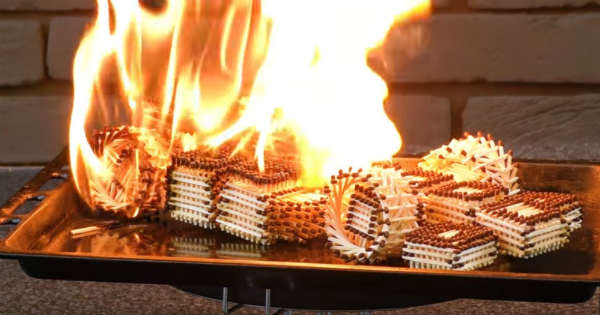 That is right, the video you are about to see features a very talented guy building a F1 race car out of matches. The first thing he makes is the wheels. He comes up with a clever tool made out of cardboard, and sets the matches one by one on it, then he sticks some more matches between them and finishes the wheel.

Next he makes four cubes which form the body of the F1 race car, and every cube is smaller in height by the previous one. He connects them with more matches in the middle. He then adds couple of more cubes on each side of the car. Finally, he attaches the four wheels he made earlier, which completes the built. It took a whole week to make this car, but what he does at the end is shocking, he decides to burn the car! We see how the car suddenly bursts into flames and to be honest that made us sad for a second. What do you think, should have he kept the car?

At last, check out the 10 best vehicles made out of LEGO bricks.