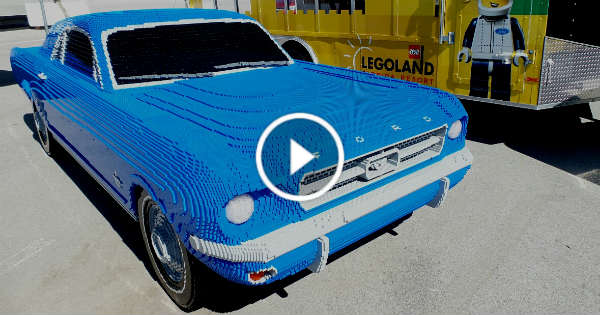 What do you think of first when you hear the word Lego? Probably just those tiny colorful bricks or cubes and some toys who children play with. LEGO has been an inspiration to many people over the years and they have always been attempting to create something unique. Though there are some more complex structures and designs you can construct with them, the creator of this masterpiece and unique replica had something else in mind. This person managed to construct a life-sized Lego Ford Mustang! Yes, that is right. It took him nearly 200,000 tiny Lego bricks and lots and lots of time to build a successful replica of the 1964 classic muscle car.

What is utterly amazing about this replica is the precision and the accuracy of how it is made. This masterpiece can be found at LEGO Land in Florida, the place where only the best designs are kept. Could you just imagine how much time it is necessary to build it, as well as how many unsuccessful attempts there were? This is exactly what makes this gem so valuable. Car enthusiasts and people who simply enjoy playing with these bricks can relish in the view hence the Lego Ford Mustang will be on display outside of the Ford Driving School. What do you think, can you outstrip this masterpiece?

At last, check out the most incredible LEGO creations out there!

LEGOLAND Florida is celebrating the homecoming of #BrickPony, a life-size replica of a "1964½" Ford Mustang V8 coupe made of nearly 200,000 LEGO bricks. It will now be on permanent display outside the Ford Driving School attraction

Posted by Inside the Magic on Saturday, October 1, 2016