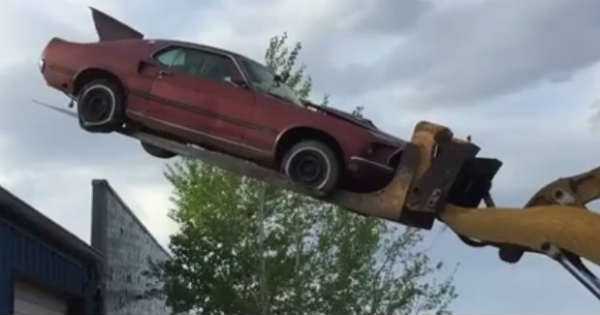 What we have in this one is definitely something you do not see every day. It`s a classic 1969 Ford Mustang Mach 1 bar find posted by Roadkill`s co-host – Mike Finnegan on Facebook. As a boy growing up in the southern part of California, Mike had the passion for tinkering with things. He loved taking things apart and putting them back together. He also loves road trips and those adventures has taken him all around the US, while collecting many cars and watercrafts along the way. It`s also worth mentioning that Mike is a drag boat racing champion as well.

Back to the matter at hand, this 1969 Ford Mustang Mach 1 was supposed to be scraped at the junkyard. However, Mike Finnigan and the boys from Roadkill arrived just at time to save the classic car from annihilation. Having said all the previous things about Mike Finnigan, you just can`t wish for a better savior. The `69 Mustang was actually saved for a Roadkill episode. The `69 Mustang comes with different powertrain varieties. However, we suppose this one is powered by a 428 Cobra Jet V8 engine with all the power going through a 4 speed manual transmission. Now this Mustang is going to be rebuilt and restored to its former glory. We can`t wait to see what the guys from Roadkill are going to do with it.

Finally, see this wonderful surprise a son made to his father. He bought him a 1972 Ford Mustang Mach 1! Respect!

Now here's something you don't see everyday. 1969 Ford Mustang Mach 1 dangling precariously over a shed. We bout to rescue this car from an "auto recycling parlour" for an episode of Roadkill and yes, we promise not to trash this one. 🙂 #thedisgustang #roadkillshow #hazmatsuitrequired #osha