There is not one person alive that has not watched the Back To The Future movies, especially the second part where Doc Emmett Brown and Michael J Fox burned the big screens as they made one heck of a fan base! The movie is however important for one thing especially – the Hoverboard! Yup, that`s the idea and concept that was set by this cult movie! 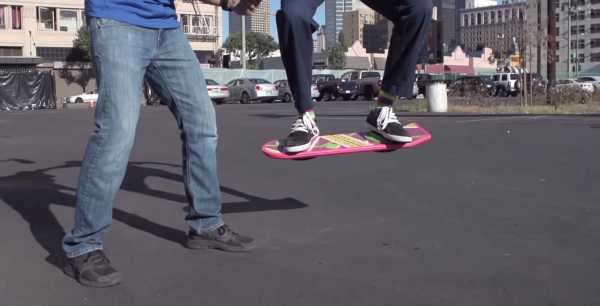 It`s 2014 now! Doc is here, or Christopher Lloyd if you want to use the real name. He drove into his GMC DeLorean on the parking lot where his fans were waiting for him! One of the loudest and most excited was the legendary skateboarder Tony Hawk! He was the inspiration of many young skaters while he says that the movie Back To The Future 2 and the Hoverboard were his inspiration! Also, he said that almost every pro skater now started skating because of this film! Tony Hawk was not the only one that waited eagerly for Doc and the hoverboard. The musician Moby was also there, who said he was stunned by the technology as he does not know how does it manage to fly like that!

The important thing is that the Hoverboard is real! Tony Hawk, Moby, Terrel Owens, the professional athlete who was so impressed by the way his feet were so off the ground! Rapper Schoolboy Q had something to say as well! Agnes Bruckner, however, was the only one to ask for the hoverboard to take it home! She was denied, of course.
Anyway, take a look at this amazing video where all these stars look forward on “playing” with the board of the future – the HOVERBOARD! There is a proof that cool ideas can come out of a movie!

Finally, if you want to read more about Tony Hawk`s biography, follow this link!

This thing is the Dream of a Skateboarder since the movie “Back To The Future”!