Celebrity lifestyle and car event Gumball 3000 Rally was held traditionally in the UK earlier this year. One of Gumball`s most renowned teams – Team Betsafe – took things to an entirely different level. They brought an actual F1 car to race against the Porsches, McLarens and Bentleys. In this one, you can see a raw street F1 footage that shows the F1 car screaming through the streets of Manchester. 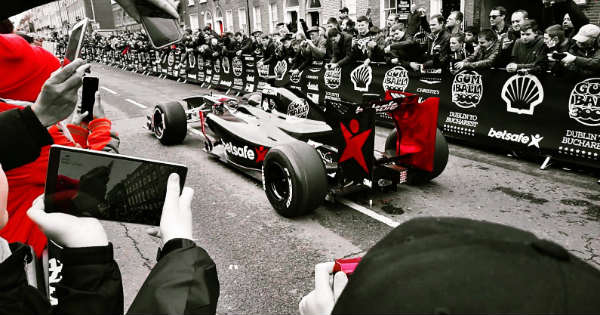 You can see it speeding past civilian cars, courteously stopping to let entertained children pass the street, and even making a visit to a drive-through restaurant. Unfortunately, the name of the driver is unknown.

Team Beatsafe made this insane F1 car in a joint venture with top F1 experts and its original camp warping was created by Oskar Bakke. This street F1 car weighs 1400 pounds (driver included) and has V8 naturally aspirated Ferrari 056 engine that packs 640 horses. This insane setup takes the car from 0-600 mph in 2 seconds. Other key specifications feature a Ferrari 7-speed carbon gearbox with a carbon-fiber clutch, KERS from Ferrari, Sauber F1 Steering Wheel, MES Chassis electronics, Brembo F1 brakes, and Pirelli Zero tires. Team Betsafe are known for such ambitious moves back in the past. In 2014 Gumball Rally, they drifted a R2K Rebellion up a ski-slope.

Finally, click here to read more about the evolution of Formula One engines.