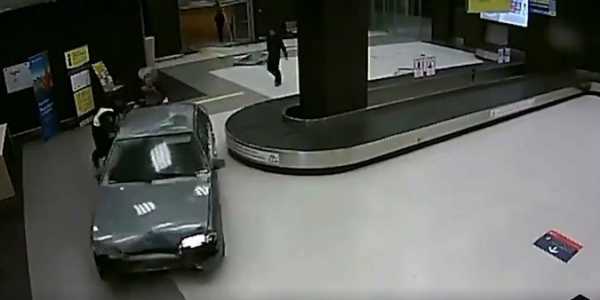 For all of you gamers out there, this is the video for you. After watching it you will most certainly relate to a chase just like in GTA. What is most surprising about it is that this is real life chase, even though it is very hard to believe. Namely, it is a cold showy day in what seems like Russia, and a car out of nowhere hits in the windows in an airport. At first, they are hard to break, but shortly after he manages to enter inside. Police officers and civilians immediately start chasing the car but are unable to stop it.

This real life chase goes to a complete new level as the car swifts through tight doors nearly avoid hitting civilians. Even though it stopped several times, its doors were locked so getting in the car seemed impossible. After driving across the whole airport, the vehicle managed to get on the streets once again, but, as seen in the video from the surveillance cameras, the police managed to get inside and finally to stop the man. Nobody knows the exact reason why he did it, but luckily no one was hurt during the chase.

If you want to read the history of GTA, follow this link.