Police Officer Runs Bikes Off The Road in Chicago! Actually the motorcycle riders being chased by the police officer because they were doing illegal motorcycle stunts and wheelies on a very busy public road in Chicago, IL. 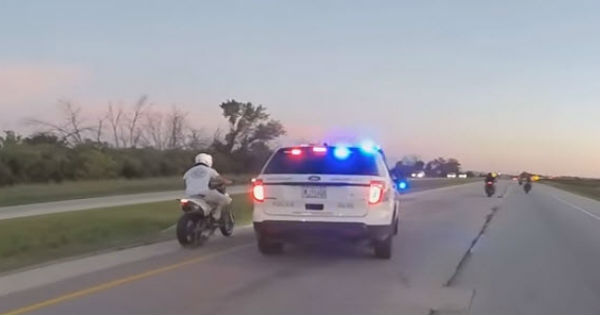 The bikers at the end wanted to escape from law enforcement. However, the policeman nearly hits several bikers and even the vehicles of some innocent drivers. The whole police chase was caught on camera attached on one of the motorcycles. According to out opinion the bikers were doing illegal activities and they should be prosecuted. As can be see on the video this crazy Bikes vs Police chase was captured in June 2017.

What do you think about the behavior of this police man? Was he provoked by these bikers on the highway so he had no other choice?

Please tell us what do you think in the comments section below & enjoy this video clip & don’t forget to share it with your friends and family!

At last, check out the tweet of this police officer who called out bike lane blockers.