Rusty Slammington isn`t a name you`d expect to be given to a car that looks normal – and this one definitely does not! This car is so out of the normal you`ll be looking twice to make sure you saw it right! This hunk of junk wasn`t always so unusual – it was first built by Stanceworks, but then it experienced a really tragic event – it burned down in a garage fire. Fortunately, people still cared enough about it to have it rebuilt in a dangerous racecar, all according to specs. 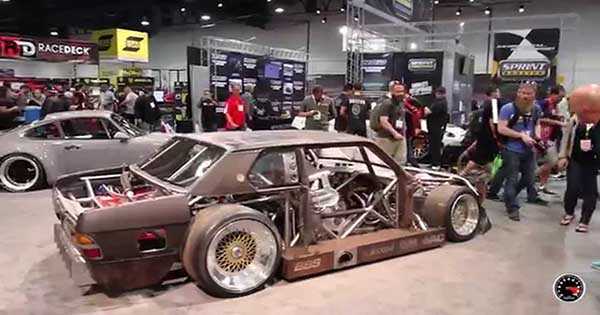 It has push rod suspension, an engine positioned in the middle and it also has a chassis that you can tinker with as much as you want. Basically it`s the overpowered Lego junk of incredible racecars.

However, all of that might cloud your thought for a while – this car`s name is still Rusty Slammington! Obviously because it`s covered in rust, but also because when you slam your foot on the gas, it takes off like a ballistic missile. But owning and using the Rusty Slammington might be difficult seeing as the car is not comfortable at all – it has stuff right in front of the front passenger seat which is really dangerous and uncomfortable. It also can`t keep quiet just for a second, as the engine is really powerful and the car is really sensitive, so it just rumbles into infinity while piercing everyone`s ears. All in all, this car is faster than many others, but it`s not really something you`d want to own for day to day life.

Finally, check out these impressive concepts!

This thing is incredible!Submitted by Alex Nelson & Kristopher Clewell