Russian driver can be seen driving his vehicle through the entrance of a Russian airport and drives it around the premises while police desperately attempts to stop him. The entire thing is recorded by CCTV cameras that show a grey vehicle slamming into the entrance of the International Airport in Kazan. The driver takes several attempts to destroy the doors while the police try to stop him with opening the car doors and apprehending him. However, this is just the beginning of the rampage that looks like out of a GTA video game. 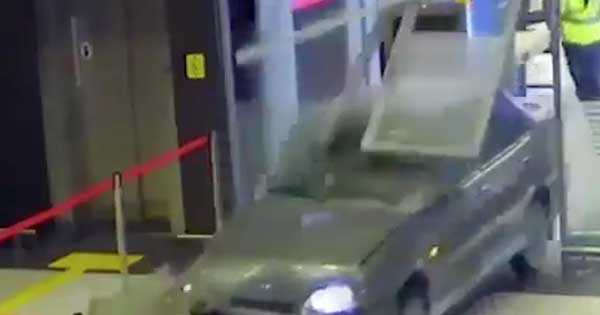 Separate CCTV footage then shows the driver continuing to plough through the premises as the police constantly chase him. Many shocked civilians urgently try to dodge his path. Finally, the Russian driver manages to smash through another door and exits the airport terminal. This is the moment where the vehicle stops and the police officers finally manage to open the car driver door. However, the footage here cuts off and it`s all we can see. Fortunately, the Kazan Airport stated on Twitter than there were no casualties.

However, Russia Today reported that some police offers were injured. As to damage done on the airport, a water pipe was reportedly broken. This caused massive flood in the airport terminal. The total damage of this was estimated at around $100,000. The driver later stated that he was only fighting for love and was in a rush to get on a platform in time. Despite being a massive crime, some people decided to make this incident comical and added rap music behind it.