Years ago, this guy heard of a VW Panelvan deep in the woody mountains, just left there without any supervision or owner claiming it. 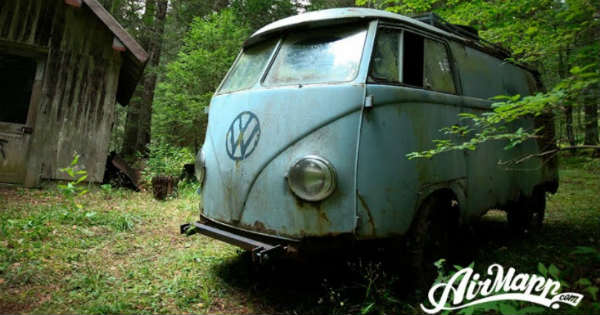 So, he did what all of us would do – he went to the mountain which was rumored to have the van and started looking for it. It was a while before he located anything, but soon enough he found the old van which had been left there for at least forty years before being found. It was covered in metal sheets and dirt, and it had considerably rusted over the four decades that it had sat under the trees. Of course, the guy couldn`t just leave this precious gem behind so he got some friends and returned to the desolate van.

While it was covered in spider webs and rust, the VW Panelvan was not unsalvageable. So, the guys spruced it up by putting four brand new tires on it, as well as a new gas tank, wiring harness and repaired the entire breaking system. Also, they put in a new engine which came from another bus that one of the guys owned.

After a few finishing touches, the gang was ready to see what the VW Panelvan would do, and it didn`t disappoint. It started up just fine and drove right out of the forest with very little difficulty. After it was broken in, it behaved like any other van that had been revived and restored. When you think about it, you have to ask yourself -- how lucky is that?