A couple of thunderstorms combined with a ring of fire managed to produce an immensely powerful tornado that caused quite a havoc in western New York. 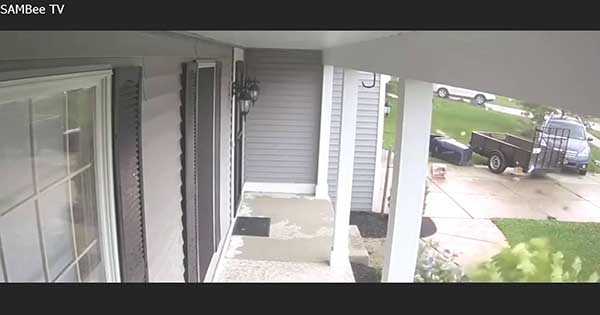 We have one sample of what this tornado was capable of doing and what you are about to see is extremely frightening. The entire situation is filmed by a home surveillance cam and the footage shows how this tornado is literally lifting a vehicle off the driveway. The impact of the tornado was so strong that the vehicle was placed from the driveway onto the yard. Before this incident, the Weather Service released a warning that severe storms are going to happen in the area. As you can see in the video below, that`s exactly what happened.

After investigating the damage done by this powerful tornado, the Weather Agency stated that the twister rated an EF2 had a staggering 105 mph maximum wind speed. The tornado was causing havoc for around five miles with a 700 yards width. At the pinnacle of the storm, more than 20,000 citizens in western New York were left without power. So, you can imagine what damage this tornado was able to make. This video is only one scary example out of thousands. Besides the car, you can also see a huge trailer along with a garbage can being lifted and relocated as well. However, the garbage can is not tossed around like the car. The tornado sure works in strange ways. This just proves how powerful Mother Nature is and how we at times are completely helpless when she uses her wrath.