One moment you are having a pleasant family drive in order to reach your vacation spot and the next moment you are jumping with your Toyota RAV4 car over a drawbridge like in a random scene out of the Dukes of Hazard movie. This happened to one unfortunate family who was simply forced to jump over the Thorofare Bridge located in Cape May, New Jersey. The Naphy family was driving to Cape May to have a pleasant vacation when out of nowhere the drawbridge started to rise. Because of the extreme incline the result could`ve been disastrous with them ending up falling 65 ft to the deep water below. 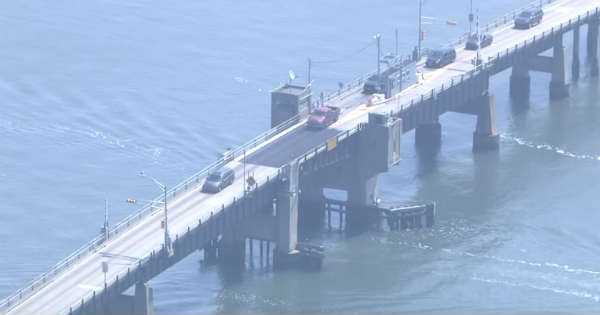 This is when Terence Naphy who was driving the car decided to do a stunt like in the Dukes of Hazard in order to save his family from disaster. Terence Naphy gunned the Toyota RAV4 car and managed to somehow jump the bridge which was three to six ft below. Fortunately for the Naphy family, none of them suffered any injury and managed to escape unscathed from this dreadful and frightening experience. However, the SUV sustained around $10,000 in damage.

According to the Lower Township Police who investigated the bridge operator says that the huge fishing vessel that was crossing had radio problems. The bridge operator also reported that he had glare problems in his eyes. However, the incident is yet to be cleared and more information should be released soon. Terence Naphy stated that he will never drive on this bridge again. We think that`s pretty fair considering everything that happened to the Naphy family.

Before you go, check out the most legendary jumps from Dukes of Hazzard.