Look at this Mercedes Police Chase! This intoxicated driver decided to do everything in his power in order to avoid prosecution. In the video below, you`ll see footage recorded from a dashcam mounted on one of the police vehicles. The intoxicated but also banned driver as well, was high on marijuana during the high-speed pursuit and UK Police. The footage features one very intense 115 mph high-speed pursuit through Bolton. The guy in the Mercedes being chased by the Bolton Police goes by the name of Mohammed Azad who is also a father of three. Azad told the court that he smoked a few joints before the pursuit began. 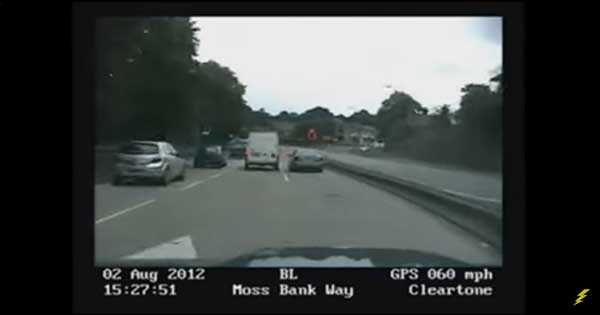 This incident doesn`t have a happy end for Azad as he was forced off the road. Afterwards, he also got tasered by the police officers. For this incident, the Bolton Crown Court jailed the intoxicated driver for 22 months. Azad is actually driving his wife`s car even though he is banned from driving. Mohammad Azad actually has epilepsy and because of this he`s deemed medically unfit to drive. It all happened when the police pulled up alongside his car and decided to investigate.

The three other occupants of the car got out of the vehicle and the police smelled cannabis. However, Azad decided to speed off in his wife`s Mercedes C class. The police who was driving a Subaru Impreza decided to pursue him. You can see Azad hurtling along Market Street, driving in opposite lanes and also narrowly avoiding crashing into other vehicles. The UK police officers got very concerned and decided to ram the vehicle into a crash barrier in order to stop this Mercedes Police Chase.

Finally, read more about drunk driving by following this link!