Over the years there have been numerous situations in which the police took advantage of its power and harassed people all over the world. Even though this tends to happen mostly in the US, there are no boundaries to where this might happen and police officers do this on a daily basis. This is something that recently had happened to this motorcycle rider as he stopped for a refill at the gas station somewhere in Queensland, Australia. He was having a peaceful ride throughout the day, but then couple of police officers who identify themselves in the video, decided to harass the man because he wore a motorcyclist vest from a Motorcycle Club. 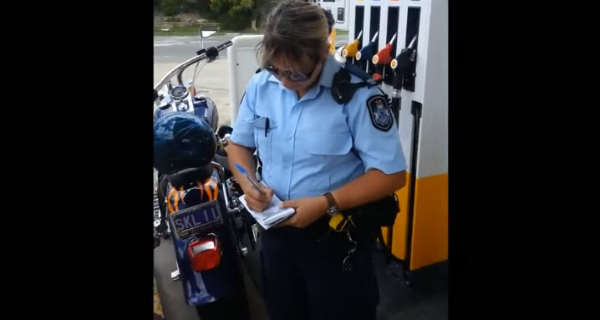 Hence people have the right to video tape officers in these situations; he took his phone out and filmed a 10 minutes long video, even though he was harassed for 40 minutes. First of all they started asking him questions about where he was going and what he wore. The police officers were so aggressive and they kept harassing the man only because he was a member of a motorcycle club.

There was the name of the club onto the vest, and it was something that bothered the police. To make things worse, this man had been stopped 21 times before this and he was simply fed up with the fact that police officers take advantage of their power and disturb innocent people who ride on two wheels all over the world.

What do you think, should they harass his for being a member of a Motorcycle Club? What was the motorcycle rider supposed to do?