There is an old saying that says we should avoid boasting about the things we have hence one day karma might strike back and we can lose everything. Hereby we take a look at this video and we see what might happen if you boast just a little but too much with your brand new ride. Karma not only struck back at this man, but it struck back almost instantly. This man was driving his brand new Mercedes Benz around the streets of his town but then decided that he should take it for a spin around this big fountain. 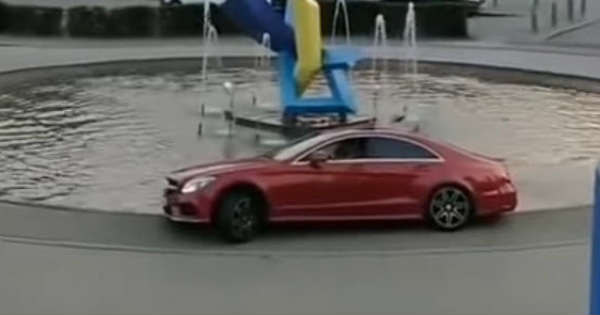 This is where things gone wrong and he made a huge mistake that was difficult to be fixed at the moment. He was driving so close to the fountain with his new ride that his two right wheels fell inside it and he was stuck. The driver could not move forwards or backwards. Surprisingly enough, he does not even get out of the Mercedes and tries to pull it out from the sticky situation all by himself, instead of immediately looking for help.

Of course he was unable to do so and people immediately took their phones out to capture this unique moment. Though the video ends shortly after and we do not know what had happened to the car or the driver, we can only assume that it took a tow truck to take the car out from the fountain. This is the reason why you should never be pompous!

Finally, follow this link to learn what you ought not do after a car accident.