We all want to get to that point in life where having a car to just take your day out on is within reach, but what if that car fights back? 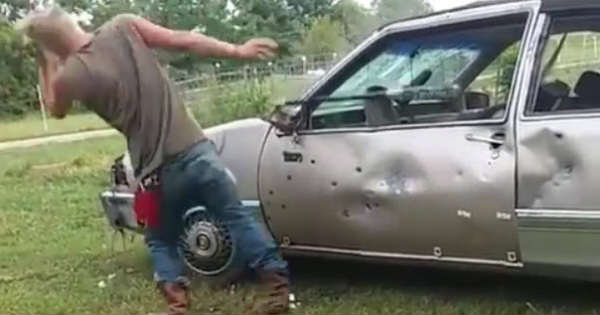 That`s exactly what happened in this video – two guys are demolishing an old used car with a baseball bat, among other things apparently, and the car is having none of it. Of course, it`s just an object and doesn`t have intent or reasoning, but it`s always funny to watch people`s dumb actions backfire on them. Anyway, the guy takes his baseball bat and goes to town on the car, but as soon as he hits the windshield the bat flies right back into his face like it wants to get revenge for everything that`s happened to the car!

Waving a confederate flag handkerchief in his pocket, I`m sure the guy was fine, but then again, seeing all of that stupid piled up in one place makes you unsure if the car fights back or the guy is simply unable to land a good hit without breaking his forehead. I hope this was a valuable lesson for the future and even though this car was already demolished with all kinds of guns and tools, it`ll take a whole lot more before it goes to the junkyard, I guess. The guy`s friend, trying to participate in the activity gives advice at first, but when he sees what happens when his friend hits the windshield, he starts laughing. For all we know, he`s still laughing because that was pretty funny.

Moreover, read what can be defined as car injury in case of a dispute!