Animals are always fascinating and watching such videos will warm your heart, but what you are about to see in the following video is a different type of an animal video hence we take a look at a raccoon that got stuck in an army tank. 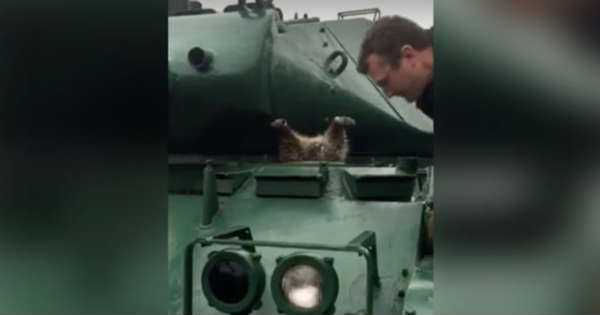 Raccoons are in a constant search for food, and they often end up in our backyards and in the garbage cans, but this one was different and brave enough to try and get inside the army tank. We can just assume that there was some food left on the inside which is probably why the raccoon tried to get in, but he miscalculated how big the whole was. They are masters at stealing, but this specific one was so fat that he got stuck halfway through.

These people took their phones out and started filming the frantic attempt to save the raccoon`s life. They immediately noticed that it was so stuck that it could not move downwards or upwards. One man even suggested that they should try and put some butter or dish soap around it. He tried to push it in hence there was a bigger hole on the other end from which the raccoon could have easily get out. Several minutes after, the raccoon finally breaks loose from the army tank and the man lifts it up by grabbing his legs. He then carefully releases it hence it might bite him.

Check out the video for more and see how the rescue mission took place!

For more funny raccoons, check out this video.