Every time we take a look at an exciting video of machines doing literary the impossible, we fill ourselves up with thrill and amazement, such will be the case with this video where we see a ferry docking in the most extreme weather conditions, unlike anything you have seen so far. Ferries are known for their power and size, as well as for their capability of transporting tons and tons of vehicles and load. But not even the strongest of a ferry could withstand a windy sea, right? Well, think twice hence the video shows us what it actually looks like when such ferry is docking on the port and at the same time, it unloads all of the vehicles. 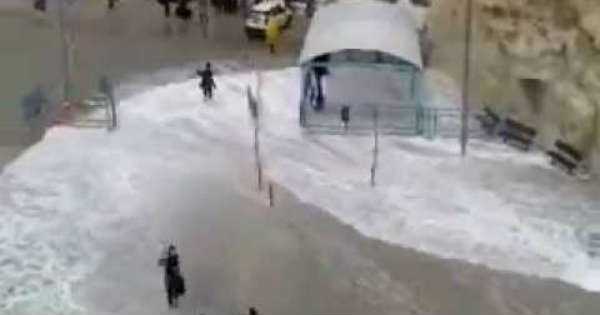 This is absolutely amazing and at the same time, pretty scary. As the ferry approaches the small port and is getting ready to be docked at it, there are people down there who are waiting for the ropes. There is a heavy wind and massive waves which makes this action very difficult. Shortly after, the people down there manage to grab hold of the rope and tie it at the port.

Then the ferry slowly and cautiously approaches the port and lowers down the ramp on which the cars will be loaded out. One by one, despite the huge waves, the cars are unloaded.

The whole situation is very scary and intense and it will make you say “WOW”. What do you think, is this ferry docking video one of the scariest videos you have seen?

For one more extreme docking adventure, follow this link.