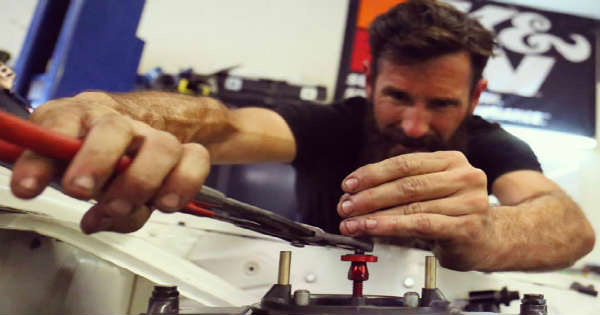 As you know Aaron Kaufman left the Gas Monkey Garage & the Fast ‘N Loud TV Show at the end of last year. All that drama with Richard Rawlings came as a shock to the Gas Monkey Garage’s fans. Everything was a big surprise as there were no prior details of his departure from the shop.

So, after he left Gas Monkey Garage, he had an idea to appear on a new car show, so we will see what will happen. In the meantime he opened his brand new business venture and now he runs his own company called Arclight Fab. For now they only produce parts for the classic Ford F-100 trucks.

Below you can see the first official video from Aaron Kaufman since he started the new company Arclight Fab. He is giving a little shake down, drifting and doing sideways in his tuned black BMW.

Arron also announced they are building their new website and very soon they will launch it. So, you can head on to ArcLightFab.com and check what they have been up.

So, what do you think about Aaron’s leaving the Gas Monkey Garage & the Fast ‘N Loud TV Show? Do you think he should work on his own TV show? How successful he will be with his own new business venture the Arclight Fab?

Please share your thoughts with us and tell us what do you think in the comments section below. Please also share this amazing video with Aaron Kaufman with your friends and family.