A terrifying video has went viral showing a dump truck driver going at full speed with a lifted trailer destroying highway signs just outside of Houston. 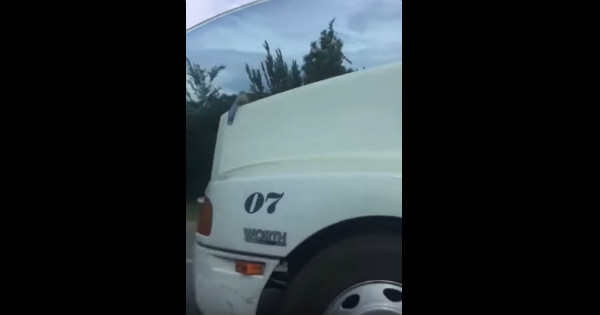 You can see this truck sending metal flying all around the frightened drivers who are following behind this very dangerous truck. The video went viral and has more than ten million views on social media. The video shows the truck who has its bucket up driving down the highway and getting snagged under a framework that`s holding the signs. The truck with its lifted trailer ripped of the framework off its base. We can`t tell how come this happened but it`s possible that the truck driver was under influence of drugs or alcohol. After this incident, the highway was closed for hours.

No wonder the highway was closed for hours because the damage done by this dump truck driver was severe. Authorities had a lot of cleaning up to do in order to open the highway for traffic again. In the video below, you can see a father and son driving their vehicle alongside the truck with its bucket lifted up. They are trying everything they can in order to warn the truck driver that his truck has a serious problem.

Nevertheless, they fail to do so and the truck did some serious damage along the way. The father and son are obviously very frightened and should be more than happy that nothing serious happened to them while driving behind the truck. We are hoping that more information regarding this incident will come to light so stay tuned.

For the funniest truck fails, check out this compilation!