This guy does everything to destroy his poor Volvo. Some may find this video quite disturbing! 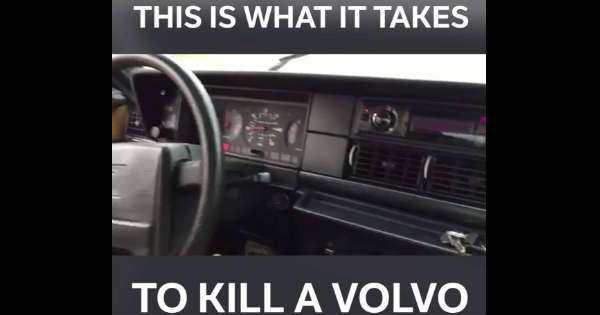 This is one of those videos that brings a tear to any car lover`s eye, and while the comments are full of “that guy doesn`t appreciate cars” and “he should have just given it to someone”, we`re not going to get into that here. However, I have to say that this poor Volvo has suffered through a ton of trouble and this was probably the last straw.

Apparently, the engine block cracked and since it would cost a lot more to repair than to just let it go, this guy decided to have a little fun and see how much it would take to actually kill a Volvo. First, he starts by draining all the coolant and oil from the car to see if it would still run dry. As you might have guessed, it runs idle, but without any problems.

Since that didn`t do it, the poor Volvo gets another treatment – he throws some dirt in there to see what happens, and the thing still keeps running like nothing is going on! Of course, the guy steps up his game and takes some pennies and nickels and throws them in as well. The car still doesn`t even knock and appears to run just fine.

So, the guy takes it for a ride and completely redlines it down the street, when it finally starts to knock and break down from the complete lack of fluids and the stuff inserted into sensitive areas.

It took a whole lot to bring down this Volvo, and I hope the modern engines are up to the challenge of filling this car`s shoes – they`re big shoes to fill.

Finally, check out the best Volvo models of all time!