When you`re driving some of the largest vehicles on the road, you really have to be careful to not be a dumb truck driver like these people. 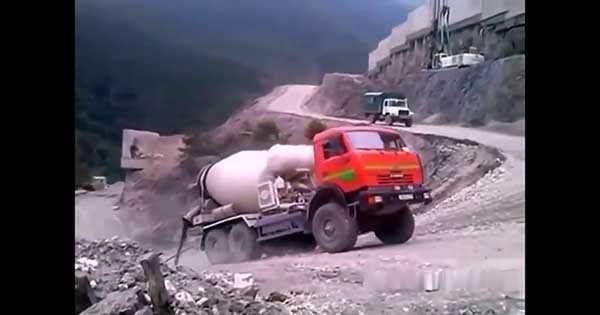 The first rule they should teach you once you start working with a truck is not to overload it especially to go off road and apparently these guys missed that lesson.

In this video, there`s a bunch of people who put so much stuff on their trucks it`s not even funny when they tip over while trying to work their hydraulics – it`s just sad, instead. Some have even doubled down, as in, they`ve loaded double or more of the truck`s payload.

What happens when you do that? Nothing good! You either tip over while you`re driving, unloading or have just finished loading a minute earlier and the truck is freshly overloaded.

My personal favorite dumb truck driver is the one that drove his cement mixing machine up a hill and he had put so much material in it that his truck actually lifted off the two front wheels!

From there it was a rather short drop down so the guy wasn`t hurt and I seriously doubt the truck was damaged either, but he`ll definitely remember that.

Another personal favorite of mine is the guy in the snow who thought he could load up half a forest in the back of his truck, so of course in the video he`s stuck in the snow with his front wheels in the air, unable to get them down.

Eventually they`ll get everything fixed and the driver will remember to not repeat this in the future, but it`s a good laugh (and a bit of judgment!) for today!

At last, check out this epic truck loading fail or this winch accessories checklist.