I think that there is not a person in the world who does not know that Dubai is one of the most incredible places in the world, a city which in the last few decades has transformed itself from a modest provincial town in the Arab world, into one of the biggest megalopolis and one of the most cosmopolitan cities on the planet. We have already written many articles about its eccentric lifestyle, and many of its riches and completely unbelievable things that can be found there. And of course, the things which are always at the very top of our interest, is the world of incredible supercars, unique and extremely powerful muscle monsters. Today we have prepared you a video clip that will show you just how eccentric those ultra-rich sheiks and emirates are. The host of the abandoned sports cars video, Mike, will show us an incredible, and at the same time sad sight, how much awesome cars are just sitting in a secluded compound, full with breathtaking cars, gathering dust and rust. 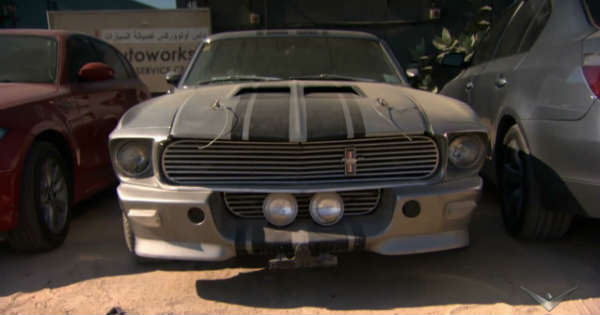 Amongst those beauties we will see one 1969 Ford Mustang GT 500, baking on the sun, all covered with dust, which is only a small portion of all that treasure (which unfortunately cannot be seen). According to Mike`s words, there is also one legend inside one of those hangars, an original 1969 Ford Mustang Carol Shelby GT 500, with a serial number 10. I think that I do not have to emphasize the fact that a car like that is literally priceless in the west. But here, in Dubai, it is just another old Detroit muscle, which is not worth all that shouting.

Just watch the video and see these abandoned sports cars. And just if you want to see how everyday Dubai citizens are treating cars, click here and see the Dubai police `modest vehicles`.