A new video from Russia has come to surface. Unlike the usual videos of crazy driving that result in massive accidents, this time we have something different. It is rather a heartwarming video that will bring a fuzzy feeling inside each and one of you. It is about one cat saver who decides to stop his vehicle in the middle of a highway in order to save a stranded kitty. 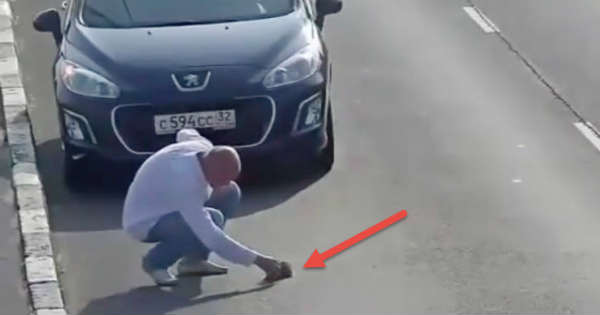 The kitty feel out of a 4WD luxury Audi and it just stood there frozen. It stood like that for over a minute before the cat lover stopped his vehicle to rescue it.

The highway where this kitty almost feel victim to the passing cars is located in Kaliningrad, a city sandwiched between Lithuania and Poland. More than dozen cars passed by only to narrowly avoid the injured kitten. That is when the cat saver with his Peugeot hatchback stops right in front of it. With hazard lights flashing he stepped out of his car and picked up the limp kitty. Then he went back to his car and passed the kitty to a passenger. The kindhearted act was captured by Kaliningrad`s CCTV network. Many thanks to the kind guy who rescued this limp kitty from possible death.

At last, click here to read the story about the brave woman who saved a dog trapped on a highway!