On a daily basis, we stumble upon different videos of people dealing with their problems on the way they can, but we have never come across something that would show us how the border police deal with ruthless drivers who disobey the law, that is until now. In the following video you are going to take a look at how they do it and you will, most certainly, be surprised by it. Namely, this Audi driver was about to cross the border from Belarus and enter in Lithuania, but then he faced a problem. The border police started checking up his trunk because something was suspicious to them. 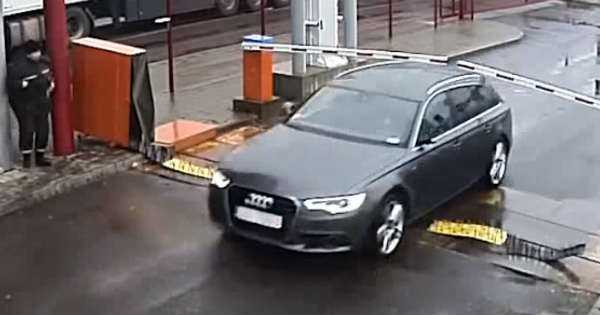 The driver, who was obviously carrying something illegal, suddenly lost his mind and pushed his car to the limit while trying to cross the ramp. Little did he know that the border police was more than just prepared for these situations and had a backup plan. Just as he was about to go through the ramp in an attempt to break it, one border police officer deployed a spike system that would puncture his tires.

Even though the video ends just seconds after and we do not see what had happened next, we can assume that the Audi driver was made to stop his car nearby. What do you think, is this the way you imagined that border police officers deal with such ruthless drivers who break the law in front of their eyes?

Finally, follow this link to learn some tips if you plan a trip to Mexico and/or Canada!