Step inside the factory that produces the 2017 Audi TT RS! We captured the whole production process in details! 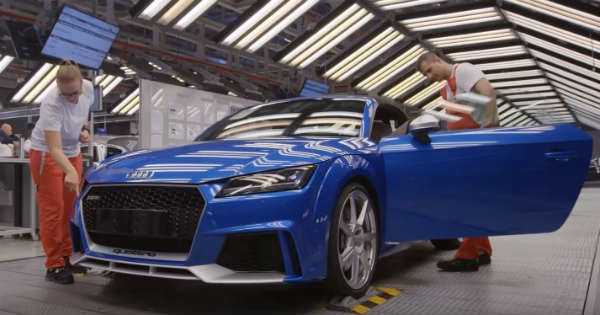 Mass production of cars is something common today. It is more advanced than ever and robots do all of the work. In the following video we take a look at such mass production process and how the 2017 Audi TT RS is built. Though the video is fairly short for the whole process to be shown, is sure is enough to give us a glimpse of how most of the part are put together, except for the bodywork.

First of all we take a look at probably, according to many, one of the most important aspects of a good car, the badge. Using a tool which helps them locate the spot, the badge is carefully placed on the hood and with a roller secured in place.

Then we are off to the dash board. Huge machines, each holding the complete dash board with all the parts and wired, place them inside the car. Then the windshield is carefully put on. Next is the heart and brain of the 2017 Audi TT RS, the engine.

On the production lane and by using robots, the engine is placed from under the car. The precision here is crucial as there is no space for mistake. Even an inch to the left or right might cause a problem.

After the front of the car has been put together comes the wheels. They are mounted and secured in place with impact guns. Check the video for more and see the complete process and final product of the amazing 2017 Audi TT RS!

Before you go, witness the power of the world’s fastest Audi TT!