Back in 2015, the Coke Zero 400 at the Daytona International Speedway was going great until there was a terrible accident which involved Austin Dillon and his car. Namely, this Daytona crash happened when Mr. Dillon lost control of his car, which then flew straight into the fence and dragged it down with itself. 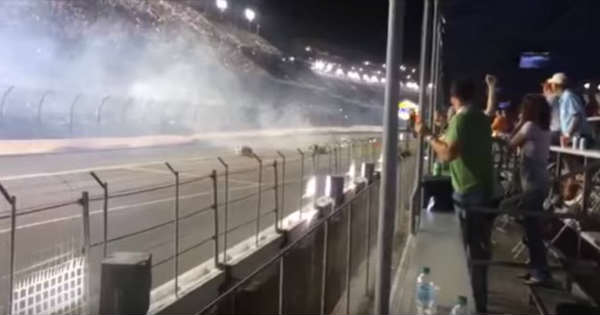 The car was so destroyed that at that point it was an ex-car, a former car, a car no more. However, the driver wasn`t, as he walked away from the accident with just two bruises on his forearm and tailbone. When you see the crash, you`ll realize that what happened here was incredible luck for Austin Dillon!

This Daytona crash is specific because it got very famous, very quickly, seeing as it was all over the major headlines back in 2015. However, there was a little spot of luck involved for everyone – except for the two bruises on the driver, nobody was hurt. The only casualty was the fence, which had managed to bend out of shape so bad that it didn`t even look like a fence anymore, just a pile of twisted metal instead. It performed its job marvelously since the 3500 pound car wasn`t thrown into the crowd!

Finally, see what the most horrifying 10 NASCAR crashes are!