As technology progresses, we see many implications of it in the car production and in these recent years many great breakthroughs have been achieved such as the first ever Audi self driving car. 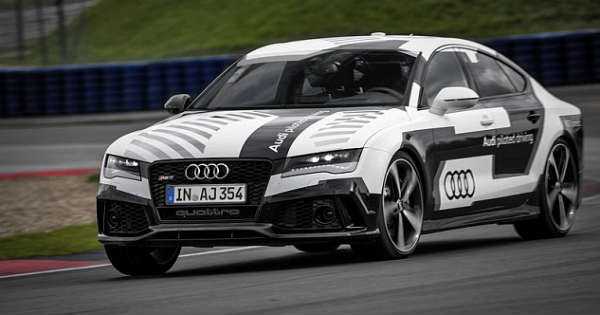 Though most of you might say that this technology has been around for couple of years right now, the following video is super fascinating to watch. But what makes this specific Audi self driving car so special? Well, this brand new piece of technology managed to complete a full lap race track WITHOUT a driver back in 2015. There are lots of people gathered to watch this event and thousands of people cheering from the stands. It is a special moment and a massive breakthrough for the car manufacturers recently.

The Audi self driving car takes off slowly and steadily but only seconds after managed to gain speed. There are cameras mounted on the inside which film the whole run, and seeing a self-steering wheel is something amazing. Seconds after and the Audi is going to face its first turn. It had no problems and managed to complete it just like when a driver would do. It slows down before it and makes a nice and clear turn. Then it gains some super speed for a driverless car and reaches amazing 149 MPH. We hear its 560 HP engine roaring like a lion.

This is something nobody would expect to see just 10 years ago. Technology is progressing fast and who knows what we might see in just 10 years time from now!

At last, read more about the companies that have the biggest potential to be the first to launch autonomous cars on the road.