The Mercedes Benz S Class is one of the most desired vehicles by the middle classes of the world today – it`s just at that point where luxury, stability and ability collide to create one Mercedes to rule them all. 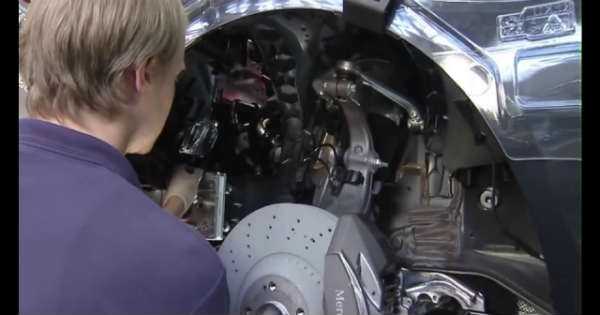 In this video we have a detailed but simultaneously succinct demonstration of how the S Class is created, and it shows you as much as you can fit in five minutes of factory work. However, even with the short version you understand really quickly how this car got its name and how Mercedes got its reputation – these people are so careful and so meticulous with their work that it`s no wonder this is such an incredible car. I don`t think there is a single person on earth that wouldn`t want something crafted so carefully.

This video mostly depicts the cosmetic detailing of the Mercedes Benz S Class, but there is also some mechanical work done. Like Rolls Royce`s Spirit of Ecstasy, the Mercedes Benz has its own insignia on the hood that these people take immense care in placing there.

The Mercedes logo has become a symptom of quality, and when you get a car with one of them you know you`re getting something that people put a lot of effort and thought into, not to mention the countless hours of labor needed to create the car from scratch.

Either way, it`s wonderful to watch everything fall into place and have a shiny new Mercedes Benz S Class come out in the end. Would definitely recommend for fellow enthusiasts!

At last, check out this interesting battle between 2016 BMW 7 series and 2016 Mercedes Benz S Class!