We are aware that this video prepared for you today is a `little bit` different than all the others you have watched or going to watch on this website. Nonetheless, if you are regularly following us, you will know that from time to time, we`d like to present you something out of the world of cars, but fulfilled with interesting and funny moments. Thus, the following clip will really get you going, especially if you are a type of person who loves the nature and animals, as we have one small group of Orca Killer Whales, recorded `drag racing` by some people cruising on a smaller speed boat. 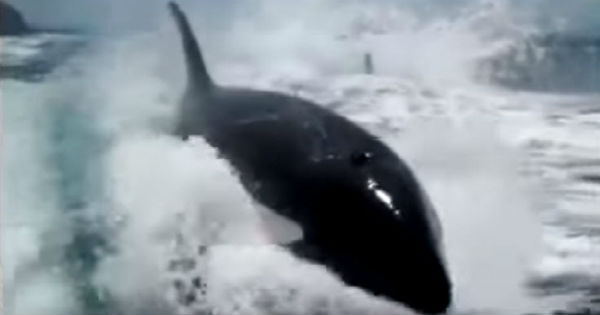 Imagine, what are the odds of something like this to occur? One in a million! Therefore, the spontaneous and sometimes loud reaction of the women in the video is pretty much understandable.

Anyways, due to a lack of info in the video, we do not know where this is exactly happening, but we can tell you that these guys were not really expecting too come across this group of water mammals.

These Orca killer whales got interested in the people  on the boat and started following them and gave them an experience they will never forget, by doing their well-known tricks that we usually see them doing in pools, or in other forms of captivity.While a speed boat can be fun having a yacht might be a more enjoyable ride. There are Viking Yachts for sale that are almost as fast as speed boats, but you will coast in luxury as well.

So, if everything aforementioned sounds interesting to you, than watch the video below in which the Orcas are `drag racing`. Too bad there was not official timing, otherwise these magnificent creatures would`ve claimed victory! In fact, as we can all notice from this recording, the Orcas are not actually trying to overtake the boat.

They are just having fun! But if they had such an intention, overtaking this small speed boat would not have been a problem at all for these whales!

At last, click here to read some interesting facts about the Killer Whales!