If we are to name some of our favorite toys from the childhood, the RC cars would probably be somewhere at the top, if not out favorite ones, and in this video a very unusual race is about to happen between such RC car and the mighty and powerful 550 HP Lamborghini Gallardo LP 550-2. Despite seeing some really odd looking races over the years, we can proudly say that this one is as odd as it can get, but at the same time it is super fun to watch. The video starts with both cars taking their spots and aligning on the road. 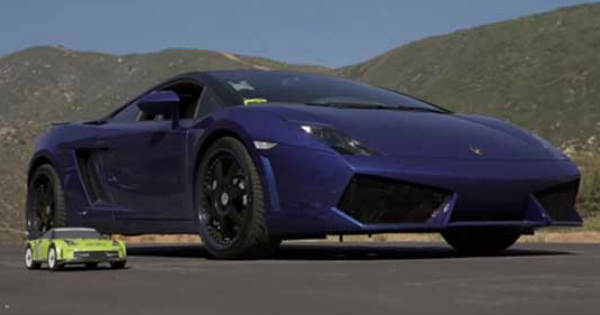 The man who filmed this race did a really great job in catching some utterly amazing shots. We see the Lamborghini Gallardo LP 550-2 doing revs and warming itself up.

Of course this is not necessary for the RC car hence it is powered on batteries. And then all of a sudden, in a flawless motion both of the cars are off to a fascinating start. Surprisingly enough, the RC car takes the lead even at the start due to the lack of friction. It weights literary nothing compared to the Gallardo. If you guys thought the winner will without a doubt be the Gallardo, you were wrong.

The RC car rushed over the finish line with a considerable lead over the Gallardo. We must admit that this was a short race and probably the Lamborghini would have won if it was a longer one, but still this is one of the most amazing races you have seen! For the best Remote controlled toys check out RC Rank.