There are tons of experiments that people have done over the years to put to the test basic theories and solve any dilemmas and problems that people have had over the years. Even though some of those tests are extremely useful and we can actually find use in them, there are some that have absolutely no point and serve just to prove something, but without any particular necessity. Having been through many such similar videos, in this one we are going to test out which of these two engine that are treated with Lucas and STP oil is going to last longer after they are drained and without oil. 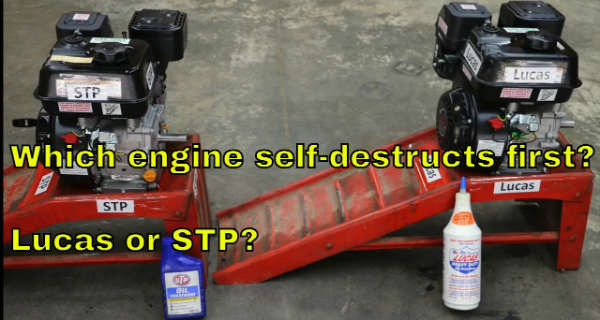 First of all, both of the engines are treated with the proper oil, the Lucas brand and the STP one. Then they are powered up and run for about 3 hours, which is the recommended time by the manufacturers to get them going and the oil to penetrate in each and every internal parts of the engine.

After this has been done, it was time for both of the engines to be drained once again and in this next run; they are going to be powered up but completely without oil. As you would expect, at the start there are no problems with both of the engines due to the fact that there is still some oil left inside, but then, 12 minutes later, the STP one simply shuts down.

It takes ten minutes longer for the Lucas one to shut down as well!