People have become pretty obsessive lately when it comes to the future and our place in it! As things go, we are probably going to be nothing more than spectators in the traffic by the end of this century! It seems that now we have what`s called VW Flying Car and it really looks real and normal! 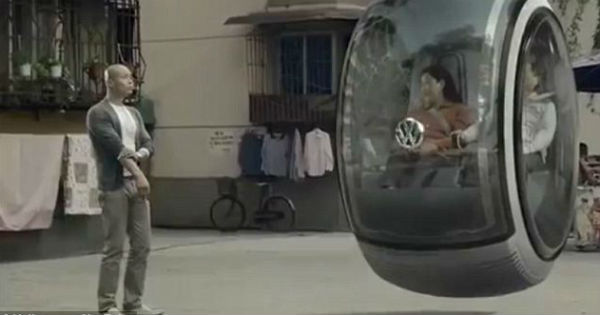 Things that looked futuristic and unreachable are now here! You have probably seen plenty of flying cars here at our web page but this particular one is not like the others! When the flying cars were first presented to the world, ideas about their design and improvement never stop emerging! Therefore, we are showing you one such idea. It is a word of the People`s Car Project by Volkswagen.

In other words, the vehicle with magnetic suspension or the Hover Car! It sounds like this automobile comes from the famous cartoon – The Jetsons! Furthermore, the aforementioned VW Flying Car project is actually an initiative brought to the public by the German automaker VW in China!

The idea is an open-source project for designing completely new car where citizens can send their proposals. In the video below you are going to see the proposal of Jia Wang, who came up with a solution for the traffic jam in the city of Chengdu. It is a word of a small city automobile, with a specific looks that is easy to park.

Also, this car is very easy to operate with. In addition, this vehicle is moving with the help of electromagnetic levitation and is equipped with safety sensors for avoiding crashes. Will this help humanity?

At last, if you are still interested in this topic, you can check these top 10 attempts to build a flying car! We must admit that some of them are very cool ideas!