This unlucky driver and owner of a brand-new BMW was a victim of a carjacker as the intruder forced himself into the driver`s vehicle! The whole thing made you wonder… Is this GTA or real life?! Just think about all the things that could happen to you if you find you self at the wrong place at the wrong time. An SUV driver was in the middle of a police chase as he was speeding down the highway trying to escape to police forces! Just as he was approaching a traffic light he suddenly stopped. 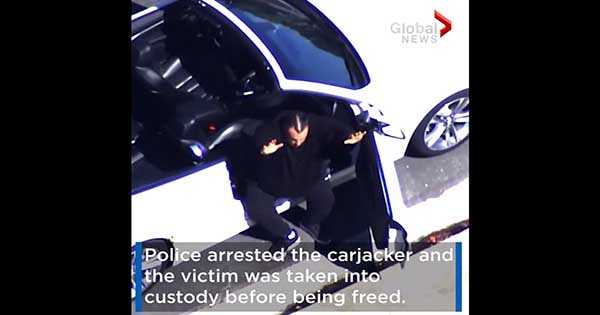 When seeing the footage, one might get the impression that the outlaw is stopping to surrender. But that was not the case at all! The only reason this guy stopped was that he could carjack a different car! A brand-new BMW, shining white. For this absurdity to be even bigger, there was an unlucky driver behind the wheel of the BMW.

The driver of the BMW says that he was not threatened to be killed nor was there a gun pointed to him! He simply told that he was going to be beaten up if he refused to drive the outlaw! Lucky for the man and for justice in California, the police was smart enough not to fall for this car switch. They were soon surrounded as the carjacker was forced to surrender! The victim, however, was taken into custody before he was freed. Take a look at the whole video and stay tuned!

At last, see what the most hijacked cars in South Africa are!

Man ditches car during police chase and hijacks a BMW