Here is the ultimate BMW drag race that many car enthusiasts have been waiting for quite some time now. It consists of many BMW M vehicles except the ones that are not SUVs. Mat Watson comes from the YouTube channel, Carwow, and he`s in the cheapest and smallest car, the M2. This car is equipped with a manual transmission, and it has the least power. However, many car lovers call this car the only real M vehicle at the moment. 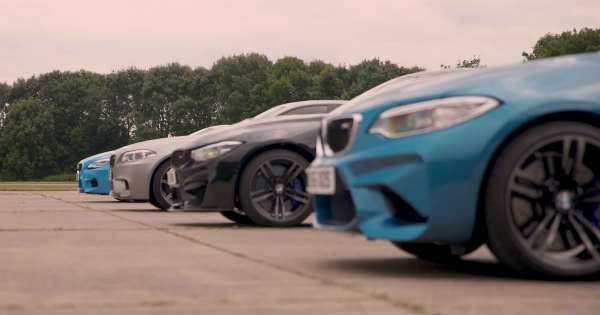 Having said this, it might not really matter how it performs in this drag race. Other racer on this grid is Paul from London Supercars. Even though this guy is an M3 owner, they decided to put him in an M6. The M6 is crazy fast and is the favorite in this race. Nevertheless, you can also bet your money on the beasty M5 because this is not your regular M5 but an 30 Jahre edition which comes with a lot of extra power. Other car in this ultimate BMW drag race is the M4 which is fitted with the competition pack.

Having said this, we are talking about a twin-turbo 3L engine which produces 450HP instead of 431. The M5 on the other hand has a re-tuned V8 engine that produces 600HP and significantly more torque-power than the M4. The BMW M6 with the Competition Pack produces 600HP as well. However, it weighs around 4243 pounds which makes it the heaviest vehicle in the group. Besides a drag race you can also witness a rolling race as well. This race is the perfect equalizer for very powerful cars.

At last, if you are in for more BMW action, follow this link!