Modern car companies these days tend to focus the production of their vehicles mainly on two important aspects, that being speed and safety. Even though there are various types of cars you can buy, depending on your preference, there is one car that recently came off the production line from BMW and is something that everyone would like to have. Of course we are talking about the mighty BMW M760Li that has been regarded as the fastest accelerating BMW car ever. 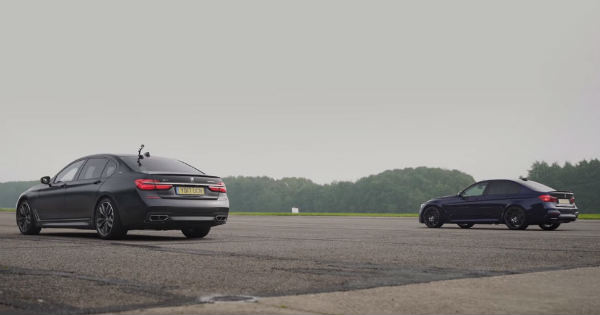 Hence there was no one who could prove it, these guys decided to test this theory and put head to head two absolute beasts. The fastest BMW M760Li versus the one and only BMW M3 Competition. It was time to see whether this was actually true or not. They go head to head on the track and compete in couple of test runs. First up it is the standing start.

Just when everything is prepared, the mighty 609 HP 6.6L twin turbo V12 M760Li was seen flying across the runway leaving behind the 450HP 3L twin turbo M3 competition pack. It took just 11.3 seconds for the BMW M760Li to finish the race, whereas it took 12.3 seconds for the mighty BMW M3 to do so. This is massive difference indeed we can confirm that this is actually the fastest BMW ever made.

Further on, they do the same test but at a speed of 50mph and yet again, the M760Li won. What do you think, is this the best BMW ever made?