There are number of extremely awesome videos on the social media of ridiculously fast cars. Though we are all used to seeing that, there are some video that will absolutely amaze us and change the way we look at certain things. Hereby we take a look at this video in which something amazing happens. Namely, these two super expensive and fast cars, the BMW and the Tesla, are driving on the highway at a significantly high speed and then something amazing happens. A mighty truck that was going at a very high speed passed them on their left side and shocked both the drivers in the BMW and the Tesla. 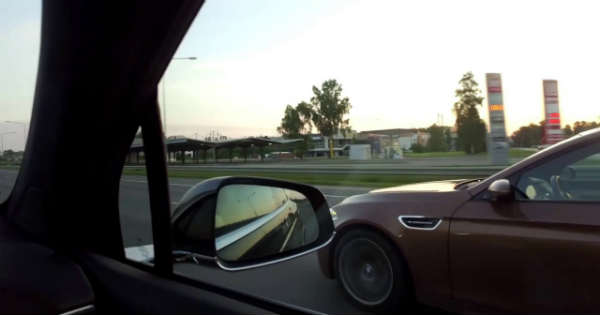 Luckily enough, one driver was previously taking a video and managed to capture this action. This happened somewhere on the highways in Russia. We can take a glimpse of the speed the Tesla was going and compare it to the speed of the mighty truck. Though it is unclear, we assume that the Tesla and the BMW were going around 110-120 km/h, whereas the truck was going way faster than that, maybe at around 140-150 km/h. We have never ever seen such massive truck to be going that fast.

One thing is for sure. Driving at such high speed with such massive truck is extremely dangerous and you should definitely avoid doing so. Moreover, this truck might endanger the lives of other people as well. What do you think, could this be the fastest truck we have ever seen?

And last but not least, follow this link to see which are the 10 fastest racing trucks ever!