While driving a car you should always be aware of all the dangers that are omnipresent, and in the following story of this woman we see why you should never place your feet on the dashboard hence this can be a very dangerous ride for you. 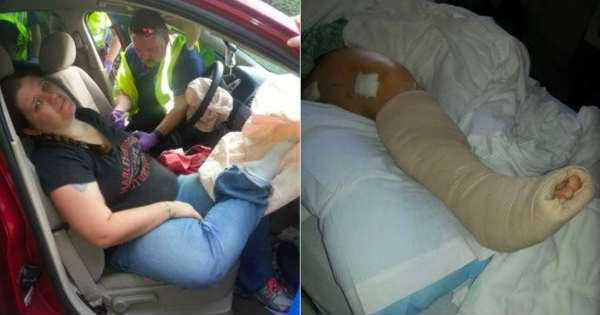 Namely, Audra Tatum, the name of the girl, was routinely driving with her husband to pick up their own sons from their parent`s house. She had always before placed her feet on the dashboard and each time she was told off by her husband not to do that hence that is very dangerous and it might break your legs. And so it happened one day when another car unexpectedly pulled in front of them thus causing the air bags to deploy.

As you might assume, this caused major injuries. Both of her knees hit her face and thus broke her nose. She also suffered fractures on both of her legs, ankles and the femur too! She said that once she took a look down at her feet and saw both of her legs facing up at her.

She knew that something was terribly wrong. Instead of walking away just with minor injuries, this dangerous ride changed her life forever. She ended up in hospital and was not able to walk for a month after undergoing number of surgeries. In the video you can see a demonstration of what this crash looks like and why you should never put your feet on the dashboard while riding in a car!

Finally, check out the 10 most common driving mistakes.