Despite seeing some utterly amazing things in the world of modifications, there is something even more, something we have not seen so far and it will blow our minds. There are plentiful motorcycles in the world which are super fast and super powerful, there are also some that look absolutely stunning but there is a bike unlike any of them. We present you the Madboxer. This is the one of a kind car engine motorcycle i.e. it has a car engine mounted as a power house, or it would be better to say that the motorcycle was built around the car engine. 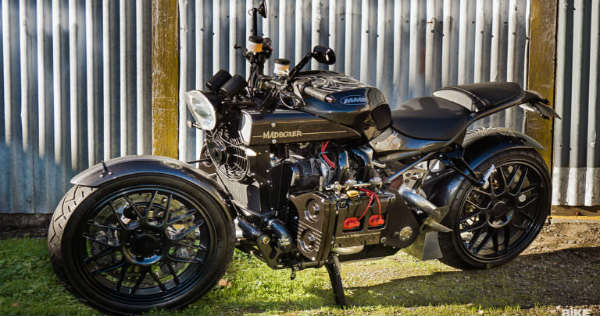 None the less, this is one awesome bike, appearance wise as well as power wise. This masterpiece was created by Marcel van Hooijdonk from New Zealand. Hence it is literary impossible to fit such engine in the bike frame, he decided to go the other way round. He used the engine as a starting point and built the frame around it. The engine used is a turbocharged EJ25 second generation WRX which is found in Subaru. After realizing that the Madboxer can actually become reality, it was time for hard work.

It took five years to finish it, but it is a unique car engine motorcycle and it is well worth the effort. There were tough time and not everything did go so smooth, but he managed to finish it after all. It weighs 313.5kg which is pretty heavy for a motorcycle. What do you think about this beauty, Madboxer?