Here is an ultimate battle your don’t see every day! 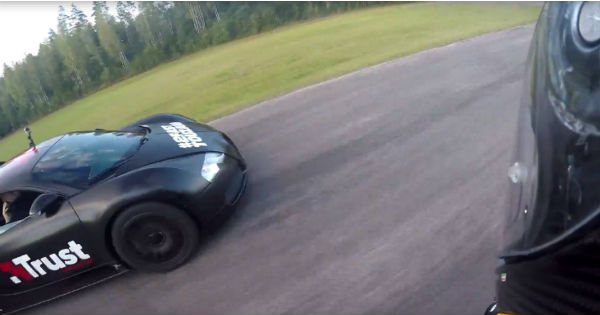 We all love those random racing videos because we are able to feel the real thrill and excitement. That is exactly what you are about to see in the following video, a race with a few spectators and, to make it even better, it all happens on a runway. What makes this video so extraordinary is because it is a duel between the fastest bike and the fastest car. To put it simple, this is an ultimate battle between the Kawasaki Ninja H2 and the Bugatti Veyron. They do a rolling start at 50 MPH and that is where the fun begins.

The engines start roaring and the Kawasaki is seen shooting itself across the runway leaving behind the Veyron. By the end of the video, the Bugatti manages to catch up on the Kawasaki but it looks like everyone knows who the winner is. So what is your opinion, is the $1.7 million Veyron worth its price hence we all know that the bikes` price is only $25,000.

Nevertheless, this video is a great way to start your day with adrenaline and excitement. What do you think, which two other vehicles would make another ultimate battle?

Finally, check out this bloodthirsty bike vs. car battle!