Have you seen a scarier looking Beetle than this one? 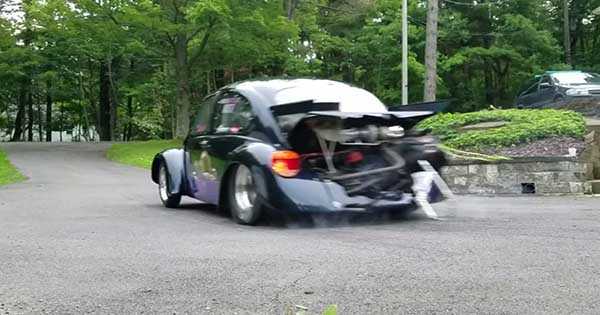 Car modifications come in every size and shape. Some even completely change the car`s look that you even can`t recognize it whereas some modify what is on the inside. However it is, the possibilities are endless and people always come up with new ideas. The typical VW Beetle has been around for quite awhile now; even two remastered versions of it were created. But the classic Beetle is a car everyone likes and enjoys. That is why in the following video we see a modified Beetle, and it is something you could not have expected it. So what is so special about it?

Well, despite having its body fully restored and repainted, the typical VW Beetle has something else up in its sleeve. It has a huge engine installed and replaced on the back.

It is so big that the hood can`t be closed. A special frame was necessary in order to fix it tight. The car is seen, in the short video, doing revs and in a sudden and brusque movement it shoots itself on the road.

The engine shoots up smoke. Imagine this beast out on the drag race racing against other champions. What do you think of this wonderful modification?