We usually love to see super fast cars doing their best performances on the street and that can be clearly seen on a drag race, but today we decided to get off the cliché with a new entertaining clash of the titans. One of them has a Tractor Steam Engine. 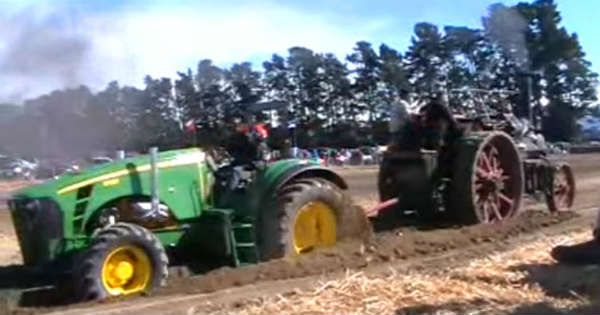 This is a real battle of the ages! So, do not be surprised if you don`t see any Nissan GTR, Lamborghini or Mustang, because today we have a pulling battle between two tractors. Not just any tractor but tractors from a totally different period of time! So this can also be named -- the ultimate battle between two technological eras!

Tractor Steam Engine vs Drag Tractor! The ring is an already known terrain for these powerful machines, as they are destined for a work in the fields. But this time the goal is not to process the country, but to pull the rival as far as it is possible.

What we have here is also a perfect demonstration of a new engine versus an old one, or torque versus horsepower. Moreover, the Steam Traction motor has impressive torque, but the JD has much more HP.

Actually we are talking about 800HP vs 18HP! So which specification is about to win? Does that steam engine going to refuse to be beaten? Is the weight of the tractor going to be a crucial point of this battle?

Well, in a tug of war competition traction beats horsepower anytime! And that tractor steam engine has a lot more weight thus a lot more torque! Nevertheless, this made us very happy!

To witness a 100 years old tech beating a brand new JD truck in a tug of war, is not a sight that can be seen every day! It turned out that 800HP vs 18HP doesn`t matter at all! It`s all about that traction baby!