Meanwhile in Compton, California this guy drags repossessed car trough the streets and he doesn’t car the car scratching off the asphalt. Probably he thinks he is got a job to do and does not care about anything else. This video already went viral on the internet. 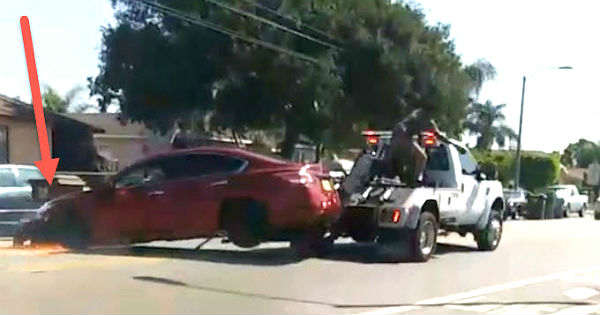 This Repo tow truck driver that repossessed the car in Compton was actually chased by the owner of the towed vehicle. He attacked the tow truck driver with a crowbar from behind. In the meantime these guys recorded the entire scene on camera and waited for Police to arrive. However the guys who caught all this on tape were running the stop signs just to record somebody doing their own job. So, we think they should be more careful and try not to do illegal activities while recording the video.

However, we think the owner of the car should anyway pay for his fees and bills and he should not try to stop the repo man.

What do you think about this situation? Please share your thoughts with us in the comment section below & thanks in advance for sharing this post with your friends on Facebook. Sharing is caring, don’t be selfish! 🙂