Japan, as you all know is a country of great tradition an by being that, it has a lot to offer! And when we say a lot to offer we mean that there are a lot of weird and even creepy stuff, like for example the scariest bridge ever seen! 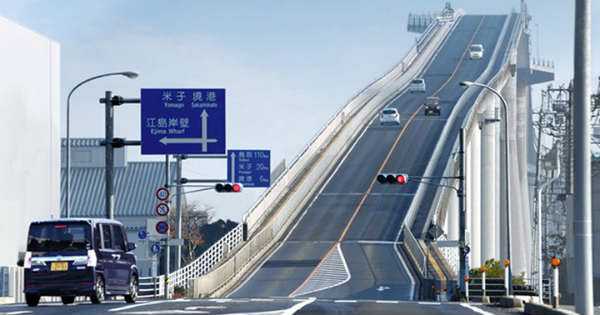 Cultures are different, and so is architecture in each one! When you will have the opportunity to drive around Japan, you will surely be amazed and positively shocked by the unique buildings that this country has to offer. However, when you start your cruising around the city of Matsue you will be definitely dragged by the appearance of the spectacular Ejima bride, which is everything, but normal. However, this is the scariest bridge in Japan!

Built in 2004, this bridge continues to own the title as the world’s scariest bridge, as a result of its rigid frame that is spanning over 1,500 yards. The faint-hearted drivers that will come across this extraordinary bridge will undoubtedly be looking for another alternative way to cross the river. Not everyone has the courage to go over this bridge as it looks very dangerous, but that should not be the deal here! Although it is looking like a roller-coaster ride, this bridge is built with high safety standards. Apropos, it is OK to pass it without having heart attacks!

The vast majority believes that behind this construction is standing a team of amateur engineers, but that is actually the opposite. The reason why Ejima bridge is so high and it has steep increments is that it had to leave some space for the large 500 tons ships which are passing below it. So at the end of the day, it is a smart solution right?! Enjoy the video folks!

For the most spectacular bridges in the World, check out this list!