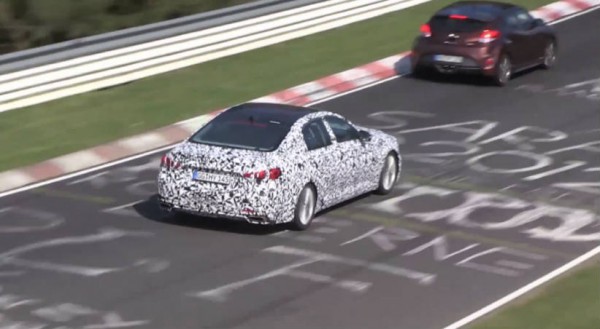 A recent spy video of the upcoming 2015 Hyundai Genesis shows new exterior styling based on the Fluidic Sculpture design philosophy as well as richer interior, all-wheel drive option and a sportier ride. Hyundai`s strategy is to reach the buyers from the German premium brands. Hyundai aimed the first generation Genesis sedan at Mercedes-Benz C-Class and BMW 3 Series buyers, but not to many of those came on board. The new 2015 Genesis sedan is expected to have improved ride and handling performance. This time all-wheel-drive option is aimed for the buyers living in cold climates. Those customers didn`t buy the current Genesis sedan because it has no rear drive configuration.

The first Hyundai sedan with All-Wheel Drive Configuration should catch the BMW owners, especially those who are dealing with snow and ice because about 50 % of the BMWs sold in the U.S. are with all-wheel drive and the number is expected to grow in the future.

Derek Joyce, Hyundai`s spokesman said the HCD-14 Genesis concept unveiled at the 2013 Detroit Auto Show is not the next Hyundai Genesis, however several hints of that design will be noticed in the future model.

Actually, the HCD-14 Genesis concept is 1.6 inches longer and 3.3 inches wider than the biggest and most luxurious sedan Hyundai Equus. In fact it`s a concept for the higher car segment.