The Tesla Model S P100D is probably one of the best electric cars on the market today. See the crazy numbers on the dyno test! 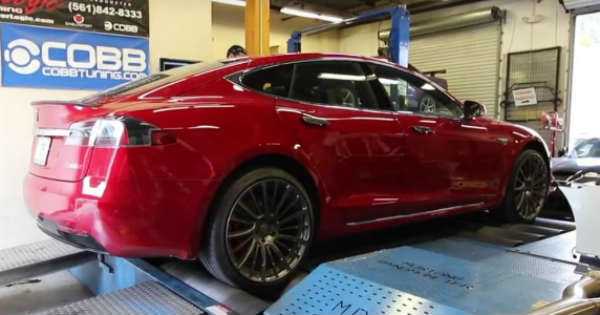 Tesla has become a major and leading name in the car industry. Many of its models have achieved great success and it is foretold that the future in the automobile world is in Tesla cars. One of the cars which have been a great success is the Tesla Model S P100D. That is why we take a look at the following video in which such Tesla car has been placed on the dyno to test its power.

At first the car is parked and secured using ropes on the stand. Several tests are going to be made, the first one being at 20 MPH. Just as it starts to gain power we immediately hear its furious sound from the exhaust. At the first test the car was in high suspension mode.

As it gained power the car lowered itself which caused the straps to loosen. They had to stop the test and set it to low suspension mode and restart everything from the start. They run several more test shortly after and the car pulls some serious power at the dyno.

It took 8 attempts for the Tesla Model S P100D to hook up on the dyno and when the results came out they were great. It pulled 920 pounds of torque and 588 HP. The run was started at 30 MPH. Nonetheless, this was the car`s first ever time to be placed on the dyno and it can be proud with what it had achieved.

What do you think, could it be even more powerful?