We are all aware of the fact that power does not necessarily have to mean victory, many people were amazed by what can you achieve even if you are a complete underdog at the track, and in the following video we get such lesson from a very talented N5 BIKE Rider . 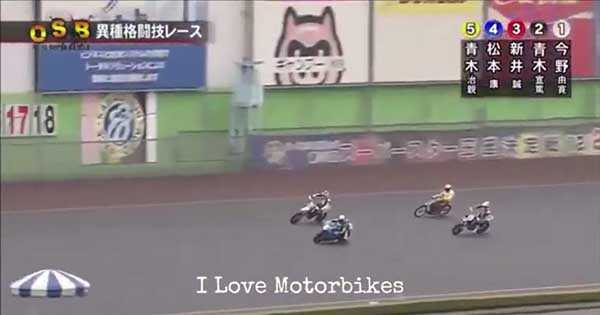 Namely, we see a motorbike race in the arena and all of the racers are preparing for the start. But what makes this race so unusual is the fact that we see three different types of bikes racing. On the two spot up front there are two super racing bikes, behind them there are two dirt bikes and on the last spot, the complete underdog, a racer with the classic N5 BIKE Rider. We would think that the racing bikes would fight for the win.

But the talented motorbike rider in the back with his classic bike had something else in mind. As the race starts we see the two racing bikes holding on the two top spots but the classic bike rider closes in on from the behind and eventually overtaking the two dirt bikes. Several laps after and the situation is the same. Just as everyone thought that this would be an easy win for the racing bikes, the talented motorbike rider did the impossible. He overtook the top spot from the other racers and in a tight and intense finish, managed to win the race. Nobody would expect that! Check the video for more and see how this race looked like!

Finally, check out this drifting master!

Power is nothing without control!Watch the man with the N5 going from the bottom to the top! Amazing!#ILM #Power #Control #Awesome #First #Winner